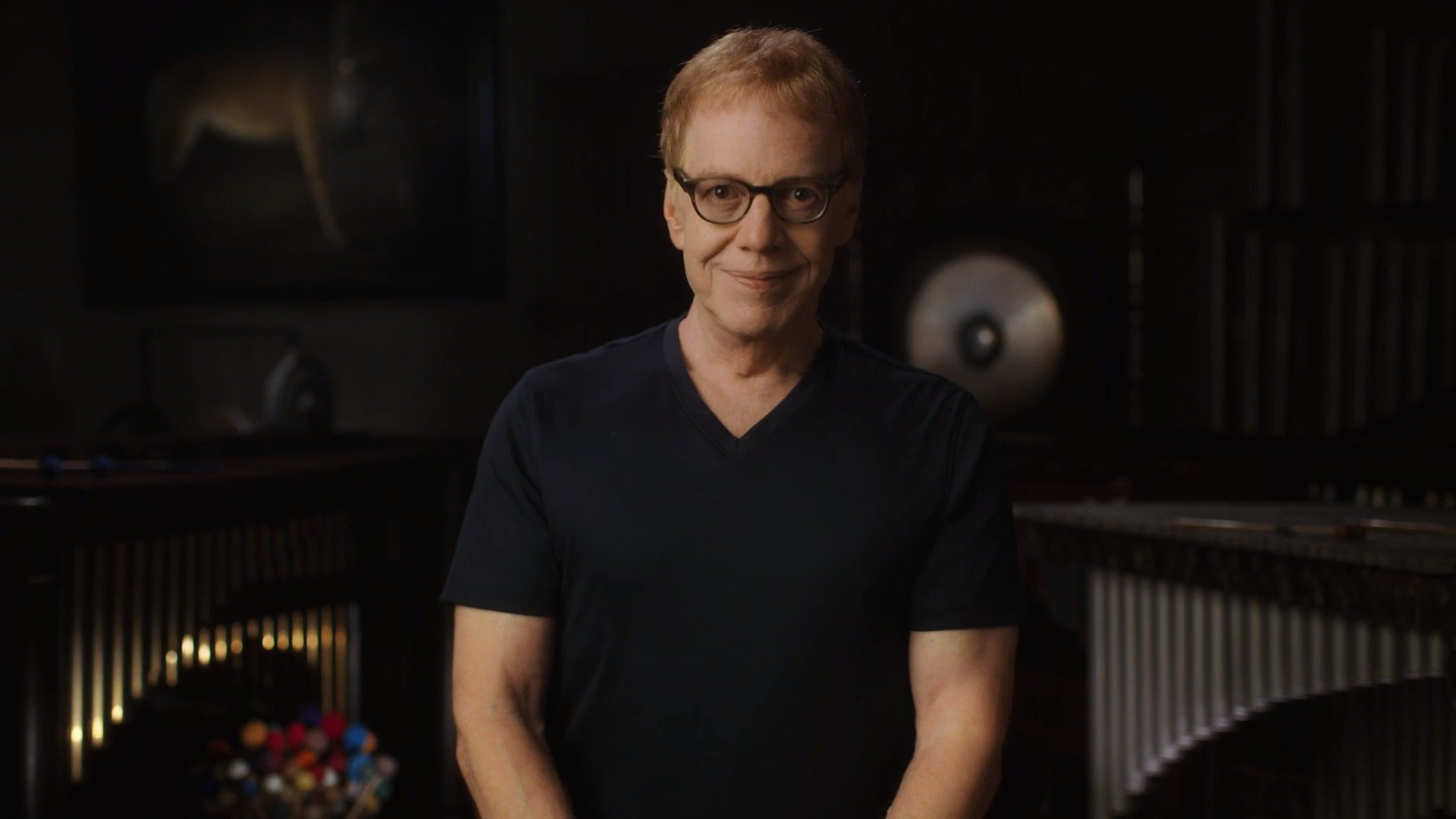 Danny Elfman Masterclass Review (Worth The Money?)
VERDICT
Danny Elfman's approach to composing music for film is approachable to a wide audience, whether trained musicians or hobbyists. This Masterclass includes a variety of content, from the story of how Elfman got into film scoring to live walkthroughs of a few of his best-known compositions. It is every bit as informative as it is entertaining.
Features
9
Production Value
9.5
Content
9
Value For Money
7.5
PROS
Great features, including a list of great composers and films to study
Excellent production value
CONS
One of the shorter Masterclass series
Perhaps already a bit dated where it concerns sample-based music production
8.8
OUR SCORE
VIEW COURSE
Masterclass

One could be forgiven for never having heard a film score by : one has to watch serious movies, prestige tv, or cut-scenes from one of several video games to encounter Zimmer’s work.

Danny Elfman’s output, on the other hand, is everywhere.

His credits include the opening theme from The Simpsons, The Nightmare Before Christmas (and many other Tim Burton movie soundtracks), a broad swathe of other film scores, and a successful performing career with the band Oingo Boingo.

Thus, you might not have known it was Danny Elfman, but chances are you’ve heard his work. All of this is to say that it was a huge get when announced “Danny Elfman Teaches Music for Film” back in 2019.

Consisting of 21 lessons adding up to 3 hours and 10 minutes of material, “Danny Elfman Teaches Music for Film” is one of several series that might draw a musician to .

In fact, while you’re here, you can check out our other reviews…

Throughout the 3 hours and 10 minutes of lessons in the Danny Elfman , film composer Danny Elfman takes us into his studio’s inner sanctum and his mind.

He begins by sharing the story of how he got into film as a child, then music as an adult, and how his performing career became a film music career.

These autobiographical sketches are both entertaining and foundational for establishing who composer Danny Elfman is and what he brings to his film scores. Once Elfman establishes this foundation, he shares some technical know-how.

This includes some musical discussion, sure, but also the music-adjacent considerations, such as trimming music so that it continues to work even as frames and measures are dropped in the editing process.

He also shares stories about working productively with others, like his long-time creative partner Tim Burton, and getting past interpersonal difficulties.

In the end, the viewer ends up with an overview of a toolkit of musical, music-adjacent, and interpersonal skills that the modern film composer needs to succeed in film scoring.

The Danny Elfman Masterclass contains a lot of the features we have come to expect from a series, but there are a few features that are unique to the Danny Elfman that are worth mentioning such as the history of film scoring and live listening.

The History Of Film Scoring

In walking us through his background, composer Danny Elfman also introduces us to the film music of his childhood: the film scores written by composers who would become his influences before he even considered a career in film scores.

He discusses the impact Max Steiner and Bernard Herrmann had on his development as a lover of film, and later a film composer.

In particular, he points to the history of the narrative music-making tradition in film. He connects it to the late Romantic tradition of the great Russian composers: Tchaikovsky, Stravinsky, and Prokofiev.

In one fell swoop, he draws a straight line from these composers through the scores accompanying King Kong and Bride of Frankenstein, through to the big, shimmering, lyrical strings parts found in John Williams’ scores. He argues that Williams revitalized the lyrical orchestral film score.

What becomes abundantly clear in listening to composer Danny Elfman’s lecture on the history of film music is that he is, first and foremost, a film lover and a student of the greats of film scoring.

His creative process is informed by extensive study, not in school but in the theater. Film scoring came naturally to him after he gained some notoriety via Oingo Boingo because he had already immersed himself in the art of film scoring on the other end, as an audience member.

Though he never says it outright, these moments in the Danny Elfman , in which he shares his influences with us, are essentially the same as homework assignments.

One of the key steps that turned Danny Elfman into Danny Elfman is a deep understanding of a list of composers and the films they worked on.

For a prospective film composer, Elfman has outlined the path to becoming well-versed in the history of film scoring.

Oscar-nominated composer Danny Elfman teaches you his eclectic creative process and his approach to elevating a story with sound.

Scattered throughout the series are a few very special moments, in which composer Danny Elfman walks us through particular elements and techniques that he has included in well-known and well-loved music examples.

Each of these opportunities to follow Elfman’s thought process and the path he takes from idea to finished composition is invaluable, especially for a newer film composer unsure where to begin in generating ideas and developing them into pieces of music.

Danny Elfman’s personality is manifested in his studio, and the B-roll from his includes a bunch of shots from his studio. It is all so artfully done, as we have come to expect from , and the production value is a 10 out of 10.

Before , I never would have expected to be so intrigued by hours of someone talking into a camera, but the sound, lighting, and edit pacing are all so well-done that I am left without complaints.

One of the fascinating aspects of as a medium is that it makes a whole host of accomplished individuals a little more accessible. At the beginning of the second lesson, Elfman says, “You have to understand — me getting into music is a freak accident.”

What follows throughout that lesson and the rest of the series is the story of how he became a musician as an adult, with very little musical training aside from a few lessons he stole by sneaking into a University Gamelan ensemble in California.

What might at first seem like entertaining stories added strictly to fill out the 5 to 10-minute lesson span, actually brings a critical bit of perspective.

To every musician watching who has had an atypical musical career, these anecdotes are priceless because they reinforce our potential for greatness.

They suggest that the barriers we perceive as standing between ourselves and the musical careers we aspire to may not be as rigid as they seem.

Is The Danny Elfman Worth It?

As other review articles mentioned, is a subscription billed annually at $180. There are over 150 classes, each one ranging between two and five hours of content.

The question for the prospective subscriber is, “how many of these classes interest you?”

If the answer is 150, and you have enough free time to binge through each of the 150 classes you find interesting, it ends up being about $1.20 per class, which is a steal.

If, however, you are solely interested in the Danny Elfman , and not even in the other masterclasses offered by musicians and composers, then I might caution that $180 is quite a lot of money for three hours’ worth of content.

I know a handful of very good musicians and teachers who would charge about the same for 3 hours of one-on-one lessons. In all honesty, the latter would be a better deal than the former.

With one subscription for all of the different series, there is no real competition between series. Still, it is worth noting that the Danny Elfman is on the shorter side compared to some of the other music-related masterclasses.

Even in considering quality over quantity, this is a pretty substantial difference.

Oscar-nominated composer Danny Elfman teaches you his eclectic creative process and his approach to elevating a story with sound.

Perhaps I’m biased because I would listen to just about anybody tell me about their creative process.

There is so much variety in how people’s minds work and how they arrive at sounds that make sense to them that I find the subject and how people communicate the subject utterly fascinating.

Having said that, Danny Elfman’s discussion of film scores and his approach to composition is truly something special.

A few moments in the series continue to rattle around in the back of my mind as I take a seat in my studio to work on my own music.

If for no other reason than to be impacted by these moments, I recommend checking out the Danny Elfman .