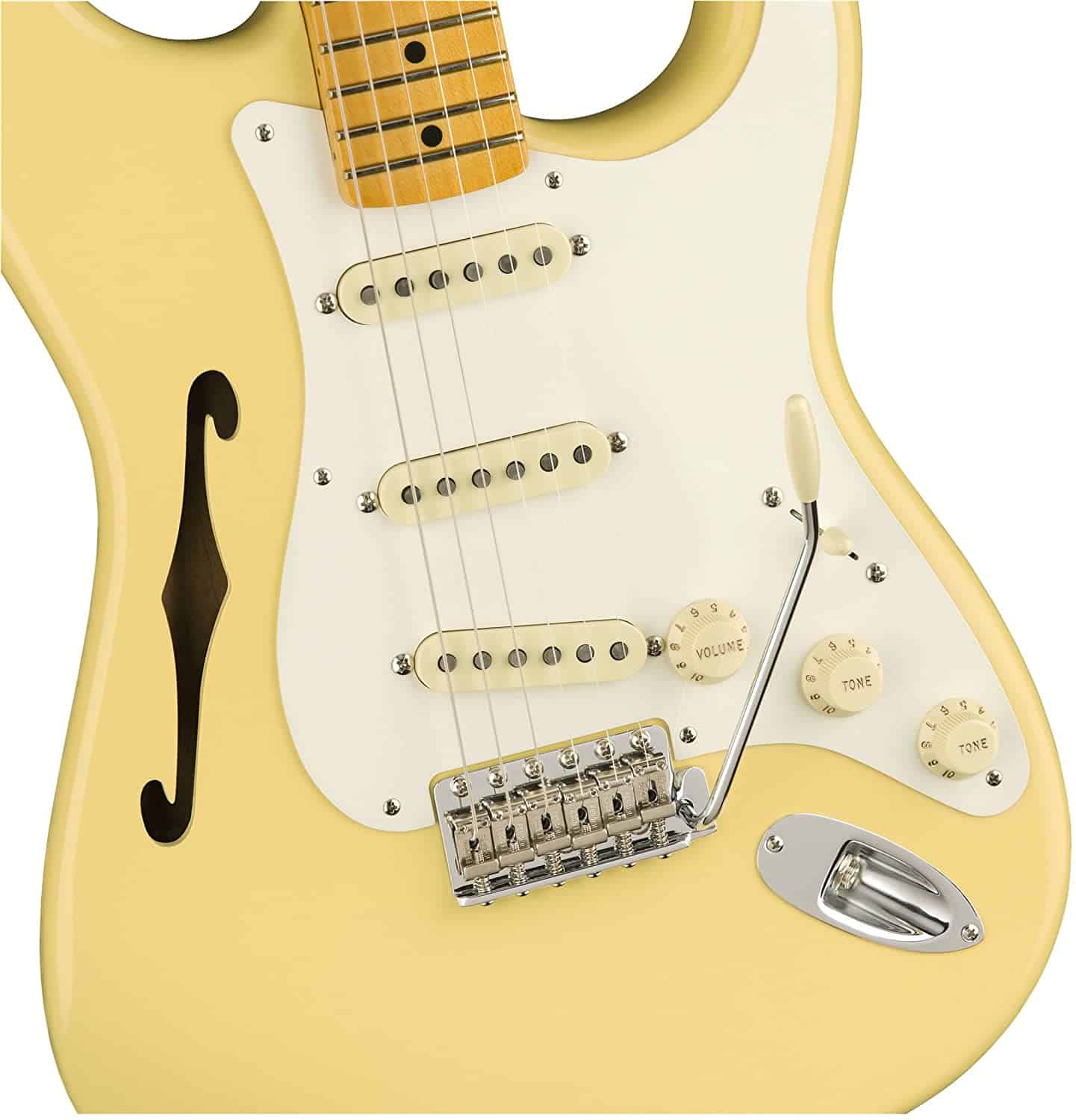 The Eric Johnson Signature Thinline aims to be a perfect marriage between a semi-hollow body guitar with a traditional Strat. This is Eric’s vision and part of his constant search for great tone. The Fender Eric Johnson Thinline provides another dimension to the world’s most beloved electric guitar.

This guitar is seriously amazing, it’s a flawlessly executed vision by one of the most notable guitarists of the last 40 years. This signature Strat plays and feels like a thinline Strat ought to – you get the classic Strat twang with the warmth of the chambered body. Read on to find out how the Eric Johnson Signature Stratocaster stacks up in each category…

In 2015 Eric Johnson approached Fender with an idea to create a guitar that featured the tones from his favorites hollow-body guitars with a Stratocaster. Johnson was inspired by his love of the Gibson ES-335 with its markedly more dynamic range when compared to the electronically similar Les Paul.

He wanted this guitar to be lightweight and resonant, but he had to find that perfect balance that he was seeking. Johnson is known the world over not only as a virtuoso guitar player with a career full of accomplishments and accolades but also as the ultimate tone master. His quest for incredible tone has been a lifelong journey and it is reflected in the build quality of the Eric Johnson Stratocaster Thinline.

It took Fender and Eric two years to design and build this signature model guitar, but it was worth every second.

This is Fender’s first Strat Thinline ever, and it features a custom-chambered body with nitrocellulose lacquer. This allows the wood to “breathe” and add character to the traditional sound of the EJ Strat, bridging the gap between a Strat and a semi-hollow body guitar.

Along with the chambered body and the single F-hole (added to give this guitar a different look from a regular Strat), the V Shape soft maple neck also makes this Strat different. This neck shape is the perfect meeting of vintage and modern according to Johnson. It is a bolt-on neck with a scale length of 25.5 with a 12″ radius.

During the two years that it took to build this guitar, Eric and Fender experimented with different types of woods and eventually chose alder. Johnson stated that at first, they had a thin solid piece that went from the neck pocket to behind the bridge. However, they later realized that this was not “solid” enough and that it sounded a bit airy.

Then they decided to continue the block back to the strap button like on a 335. Still, they were losing a bit of mid-punch so the choice was made to widen the block, adding about an inch. They settled for a design that is four to five inches wide and goes straight from the neck pocket to the strap button.

The sound quality of the Fender Eric Johnson signature is exactly what you would expect from an instrument built to a tone master’s specifications: stellar. To put it in simple terms, this is a Strat on steroids. It features that beautiful twang but with a heavier and airier quality that comes from the chambered body.

Just like everything else in this guitar, Eric worked with Fender to voice the custom three single-coil pickups featured on both of his signature Strats. Johnson insisted on a tone control for the bridge pickup. This is one of Eric Johnson trademark tone characteristics: for those nice, open-voiced chords he shoots for the cleanest, brightest output from the bridge pickup; while for his unique killer solos he winds this pot back for a more intimate tone, adding a fuzz or Tube Driver and a bit of delay.

Eric wanted to make the bridge pickup sound a bit thicker, and that is achieved beautifully with this instrument, especially at higher volumes. You can really make this guitar sing when you get close to the amp but you can still control the feedback and make it work for you. The resonance aspect also comes through with this guitar and it feels great for both open clean sounds and overdrive as well.

The middle pickup also delivers a beautiful strat tone and sounds fantastic when combined with the neck pickup for funk rhythms and lines. It also works really well with the bridge pickup, especially for a warm overdriven tone that is not aggressive.

It is debatable whether the inclusion of the F-hole in this guitar makes it more resonant. After all, you could just have the chambered body without the F-hole. However, this design feature makes this Fender Eric Johnson signature stand out from all other Strats.

Overall, this instrument sounds gorgeous and will be a nice choice for anybody that wants to make music on a superior Stratocaster.

This Fender Eric Johnson Signature features an Alder body and top with a gorgeous nitrocellulose lacquer finish. Eric Johnson and Fender went through several prototypes with different wood configurations until they found the sweet spot for this instrument. They wanted it to be a semi-hollow body guitar but without losing the essence of what strat guitars are known for.

This Stratocaster Thinline features three Eric Johnson single-coil strat pickups with your typical two-tone control and one volume with a five-way switch. The three single-coil Stratocaster pickups were specially voiced to meet Johnson’s specifications, and are mounted to the semi-hollow, two-piece alder body with countersunk screws for greater vibration transfer.

This guitar features a comfortable 57 Soft V-shaped quarter sawn maple neck and bears a 12”-radius maple fingerboard and 21 medium-jumbo frets for enhanced playability. This is a departure from a traditional Strat and more in the vein of modern guitars like Suhrs or Andersons. It does retain some of that Fender feel for the neck but follows Eric Johnson’s specifications.

It is important to mention that the Eric Johnson Stratocaster Thinline is the first semi-hollow Strat that combines custom chambers with traditional Stratocaster arm and body contours.

Aside from the semi-hollow nature, the Eric Johnson Signature Strat and this Thinline are identical. That means that the playability of this guitar is about the same as in Johnson’s non-Thinline signature Fender Strat.

The neck is slightly beefy in the palm, with a fingerboard that is a bit of a departure from a typical strat. This and slightly taller frets give the player a distinctly modern playing experience, which enhances playability in my view. Then again, if you are a traditionalist you might not enjoy this neck very much, even though it does play better.

I suspect even those that prefer mahogany necks will still like the choice for maple neck on this guitar. Not only does it feel and plays great, but also provides a nice balance to the darker tone that is added by having a chambered body.

The feel of this guitar is fantastic. It is lightweight which adds extra confront for those that play long hours standing up. You will want to spend hours playing on this guitar thanks to its sweet tone and comfortable neck and fretboard.

I’d like to close this review with an anecdote. Years ago I was on assignment to cover an Eric Johnson concert in the Fox Theater in Boulder, Colorado. I was invited to the soundcheck and was paying close attention. Eric walks onstage plugs-in and starts playing over several open chord voicings with a bit of delay and chorus.

I was absolutely floored with his tone. I could not believe my ears. He stopped playing and turned to his tech stating that this tone was not right and directed him to start switching some tubes and whatnot. He was after the perfect tone even if it meant stopping the show. I was awestruck.

So when Fender came out with the Eric Johnson Stratocaster Thinline, I knew it would be something truly special. A thinline Strat, with a chambered body, designed under the guidance of one of the most consummate tone masters in the history of the instrument? You know you want it!