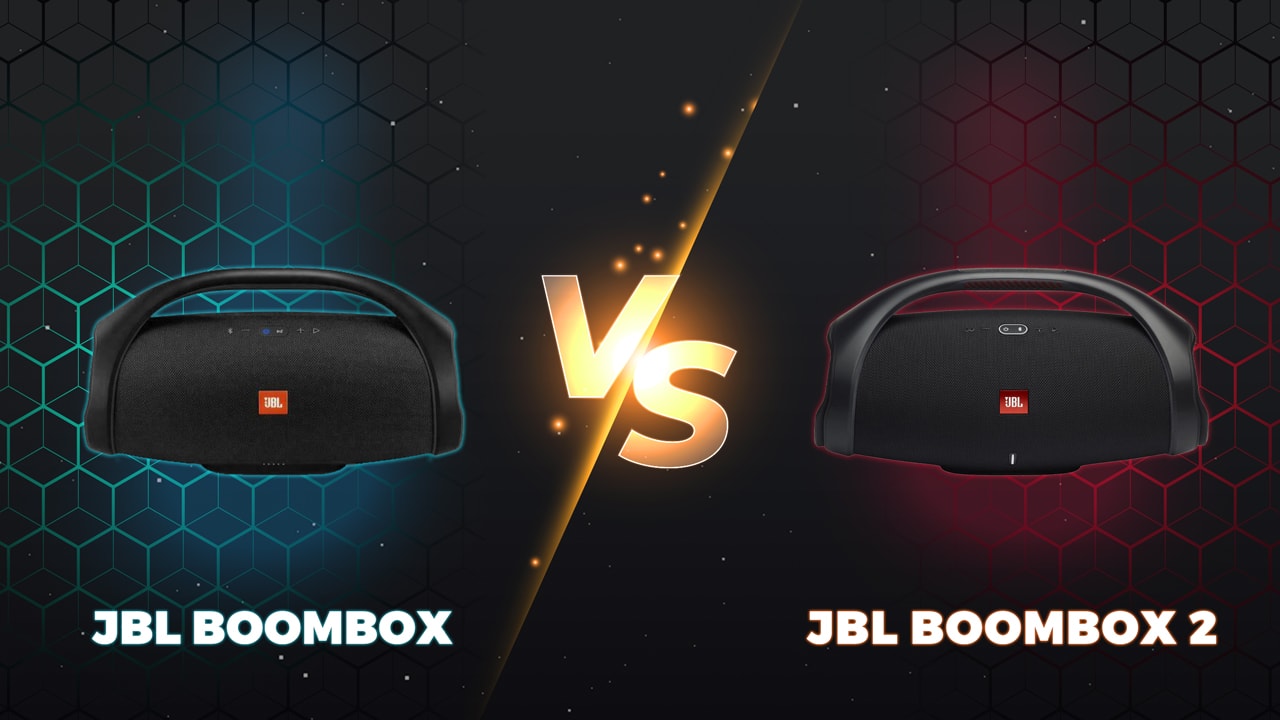 JBL Boombox vs Boombox 2: Find Out If It’s Worth The Upgrade

Producer Hive·
Bluetooth Speakers
Disclosure: We may receive commissions when you click our links and make purchases. Read our full affiliate disclosure here.

The JBL Boombox and Boombox 2 may seem like identical twins at first sight, and most people would find it tricky to tell the immediate difference between the two.

Both speakers are highly capable of providing users with a rich, clean audio signal that can be enjoyed both indoors and outdoors.

You might be considering upgrading from the Boombox to the Boombox 2, or trying to decide which is the best purchasing option for you.

We’ve also provided a basic rundown of each speaker’s primary functions and features.

While you’re here, you may also want to check out our other Bluetooth speaker shootouts:

JBL Boombox vs Boombox 2: Is It Worth The Upgrade?

The JBL Boombox and Boombox 2 are nearly identical in both size and sound performance.

Deciding whether to upgrade from the Boombox to the Boomx 2 will depend on your requirements and circumstances.

If you already own a Boombox and want to experience a slightly more powerful audio playback then the Boombox 2 is worth the upgrade.

However, it should be noted that the JBL Boombox has a handful of features that don’t come with the Boombox 2, such as speakerphone capabilities.

JBL Boombox vs Boombox 2: Is It Worth The Upgrade?

We’ve put together the table below to show you the specifications of the JBL Boombox and JBL Boombox 2.

This breakdown outlines the major differences between the two speaker models:

Made to be the most powerful, portable Bluetooth speaker, JBL Boombox delivers monstrous sound along with the hardest hitting bass.

The speaker packs a considerable amount of punch in its compact design and is a great choice for both indoor and outdoor use.

Anyone looking to purchase their first portable BlueTooth speaker should consider this as a serious entry-level option.

The party never stops with the Lifestyle Boombox 2 Bluetooth speaker system from JBL.

The Boombox 2 is designed intentionally to upgrade from the original Boombox. With that in mind, the team has made a handful of interesting design choices – some good, some questionable.

While the JBL Boombox 2 may come with some notable performance upgrades, the model is built without some of the features that make its predecessor so appealing.

The Boombox comes with a highly futuristic aesthetic that makes it both visually appealing and easy to handle.

The entire speaker is composed of 4 transducers and an active subwoofer, all powered by 2 x 30 Watt amps.

The speaker’s housing is made up of a mix of high-grade plastic for the base, interface, and handle, with a light metal used for the speaker grill.

The entire speaker weighs just over 11 lbs, which can make it a bit heavy to carry for hikes or camping adventures.

The JBL Boombox is also highly waterproof and can be submerged for up to half an hour without experiencing any significant wear.

The JBL Boombox 2 has an almost identical build to the original Boombox. The Boombox is just two pounds heavier than the Boombox, which isn’t a major difference considering the backend upgrades.

The carrying handle on the Boombox 2 comes with a textured grip for more comfortable handling and transportation.

This addition is a smart move by JBL, considering that the Boombox 2 is a bulkier model than the standard Boombox.

JBL has garnered a solid reputation for producing exceptional sounding speakers for private and corporate use.

The Boombox is built using JBL’s signature sound-shaping models and delivers a highly enjoyable listening experience for both passive and intensive music listening.

Thanks to the active subwoofer, the speaker offers users a weighty low-end that users can adjust to their liking.

The JBL Boombox also features a useful Outdoor mode, which enhances the mid-to-low range response, and is ideal for outdoor use or for playing music in crowds.

Sound performance is where the JBL Boombox starts to set itself apart from the original Boombox.

This particular model features the same 4 transducers as the first Boombox, but without the addition of an active subwoofer.

Instead, JBL has opted to pack an extra 20 watts of RMS voltage into their speaker for a fuller, cleaner tone.

The speaker does not come with any Outdoor mode or EQ options but still has admirable quality even from lengthy listening ranges.

The updated Bluetooth firmware also makes for a stronger wireless playback signal than the first Boombox.

The JBL Boombox comes with a speakerphone capability that lets users connect to the speaker to use for personal calls.

The Boombox also features a voice assistant that controls a handful of these speakerphone functions.

It can be connected or paired to a healthy list of secondary JBL speakers for an extended stereo image.

The speaker also includes two USB ports that act as charging stations for a variety of handheld devices such as cellphones or power banks.

Even though the Boombox 2 comes with a healthy boost in the sound department, it’s difficult to find logical reasons as to why they excluded certain features that came with the initial Boombox.

The USB ports for charging have been reduced from 2 to 1, and the speaker does not come with any controllable EQ or sound shaping options.

Strangely enough, the JBL team has also removed the speakerphone option from this Boombox 2

Upgrading from the Boombox to the Boombox 2 is a complex choice, as doing so will gain you certain benefits, but you will also lose a few.

If your decision to upgrade is purely based on audio quality, then the Boombox 2 is a viable option.

Even without the active subwoofer that the original Boombox has, the Boombox 2 still delivers a strong, full audio playback signal.

It’s worth noting that the Bluetooth firmware update also enhances the speaker’s performance and usability.

On the other hand, if you enjoy having access to all the features that come with the original Boombox and are pleased with its sound quality, then upgrading is a redundant move.

It won’t be worth losing the user features just to get a louder speaker.

Is Boombox 2 louder than Boombox?

The Boombox 2 is louder than the Boombox, although this difference can only be picked up with considerable amounts of intensive listening.

While the Boombox does include an active sub, the Boombox 2 added amp power creates a fuller and slightly louder overall playback signal.

Yes. JBL speakers can connect wirelessly across a variety of models using their JBL Partyboost function. This function is found on both the Boombox and Boombox 2 speakers.

Is Boombox 2 louder when plugged in?

Yes. The Boombox switches to RMS power when plugged into a wall socket. This subtle change in power helps to generate a stronger and more consistent audio playback signal.

Can you adjust the bass on JBL Boombox?

While the bass levels on the JBL Boombox cannot be precisely set or adjusted, the speaker does come with a handy Outdoor mode that boosts the mid-to-low end frequency spectrum.